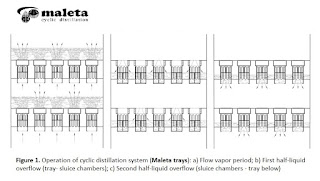 ➽ The design algorithm of a Maleta tray is as follows: the requirement as to the absence of liquid overflow on the trays during vapor supply is performed on hollow type trays while the vapor speed exceeds the column flooding. The requirement as to the absence of liquids mixing on adjacent trays during liquid overflow is ensured by means of a sluice chamber located under the tray. Cyclic distillation column works in the follow way: liquid flows (feed, reflux) are continuously supplied to the tray.