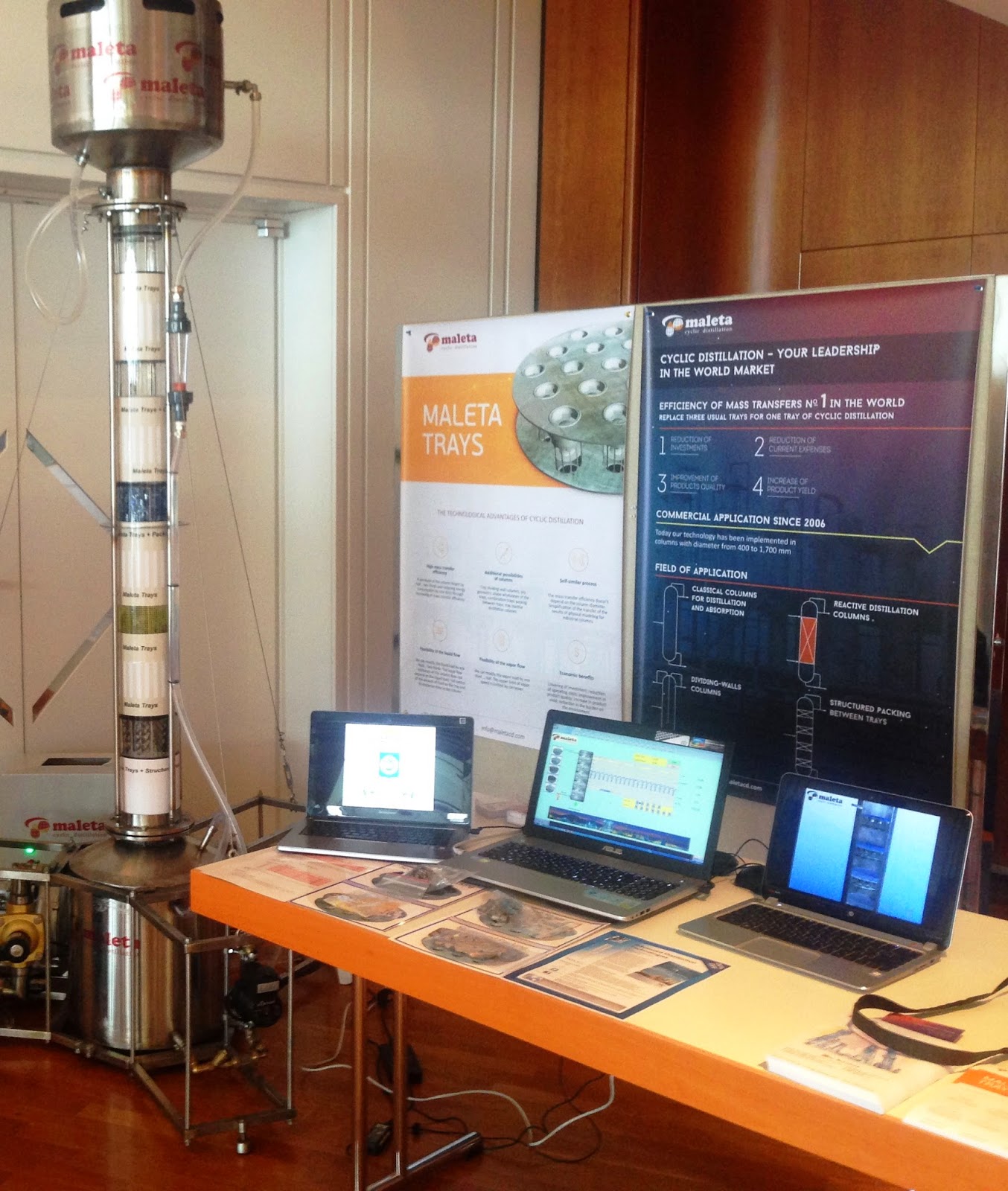 We demonstrated advantages of cyclic distillation technology in three cases:

2. Second demonstration of cyclic pilot column was for show flexibility of the vapor flow factor Fs from 1.6 to 3.6 when the liquid flow was constant 9 m3/m2hr. We can modify the vapor load in two times. The upper limit of vapor speed is limited by carryover.

3. Third demonstration was devoted to additional technological capabilities of cyclic distillation technology. It is possible to raise the efficiency of mass transfer due to the location of any type of packing between the trays and, as a result, we get the effect of bubble layer partitioning by height. The most efficient use of structured packing is achieved in a flooded condition and in emulsification mode. In this case, mass transfer area and volumetric mass transfer coefficient are increase up to 1.5…3 times. For cyclic distillation there is no fluid motion from tray to tray during vapor period. The increase in performance of the distillation column by minimizing the flow resistance in the cross-flow of liquid from the tray on a tray (single-phase fluid flow. Also we can place catalytic between maleta distillation trays. It has next technological advantages comparing to classical reactive distillation column: placement catalyst on trays in a boiling layer; ability to control the reaction time; high mass transfer efficiency.

The efficiency of distillation column depends from type internals, diffusion potential factor, viscosity, surface tension of the liquid, and other physical values. High efficiency of mass transfer can provide reducing of capital costs for construction of new and reconstruction of existing facilities; energy saving; improving the quality and increasing the yield of final products.

One of the ways of increase mass transfer efficiency of interaction phase is the use of non-stationary modes. This method is called - cyclic distillation technology and implemented as follows: lack of outflow of liquids to the trays vapor admission; lack of mixing of liquids in adjacent trays upon outflow of liquid. This result is related to the organizational structure of the flow in the distillation column that provides real conditions - the perfect displacement in liquid and vapor. Today, cyclic distillation technology works in stripping column, rectification column and tray dividing wall columns with a diameter ranging from 400 to 1700 mm. Self-similar process: the mass transfer efficiency doesn’t depend on the column diameter and simplification of the transfer of the results of physical modeling for industrial columns;

Flexibility of the vapor flow: we can modify the vapor load by one third ... half. The upper limit of vapor speed is limited by carryover;

Economic benefits: lowering of investment; reduction of operating costs; improvement in product quality; increase in product yield; reduction in the burden on the environment.
Posted by Unknown at 07:46

Why need for reactive distillation column in industries

This requirement of fewer types of equipment will save more money and will provide safe environment to the industrial experts. Reactive distillation unit will use only minimal amount of distillation column with less energy consumption. That is why it will be beneficial and profitable for high yield production in the industries.
Posted by Unknown at 08:07 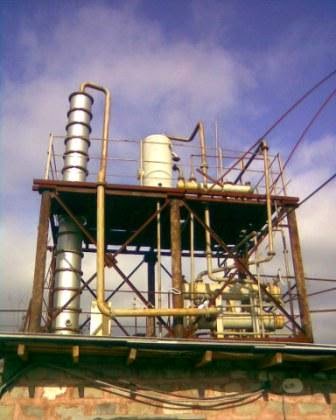 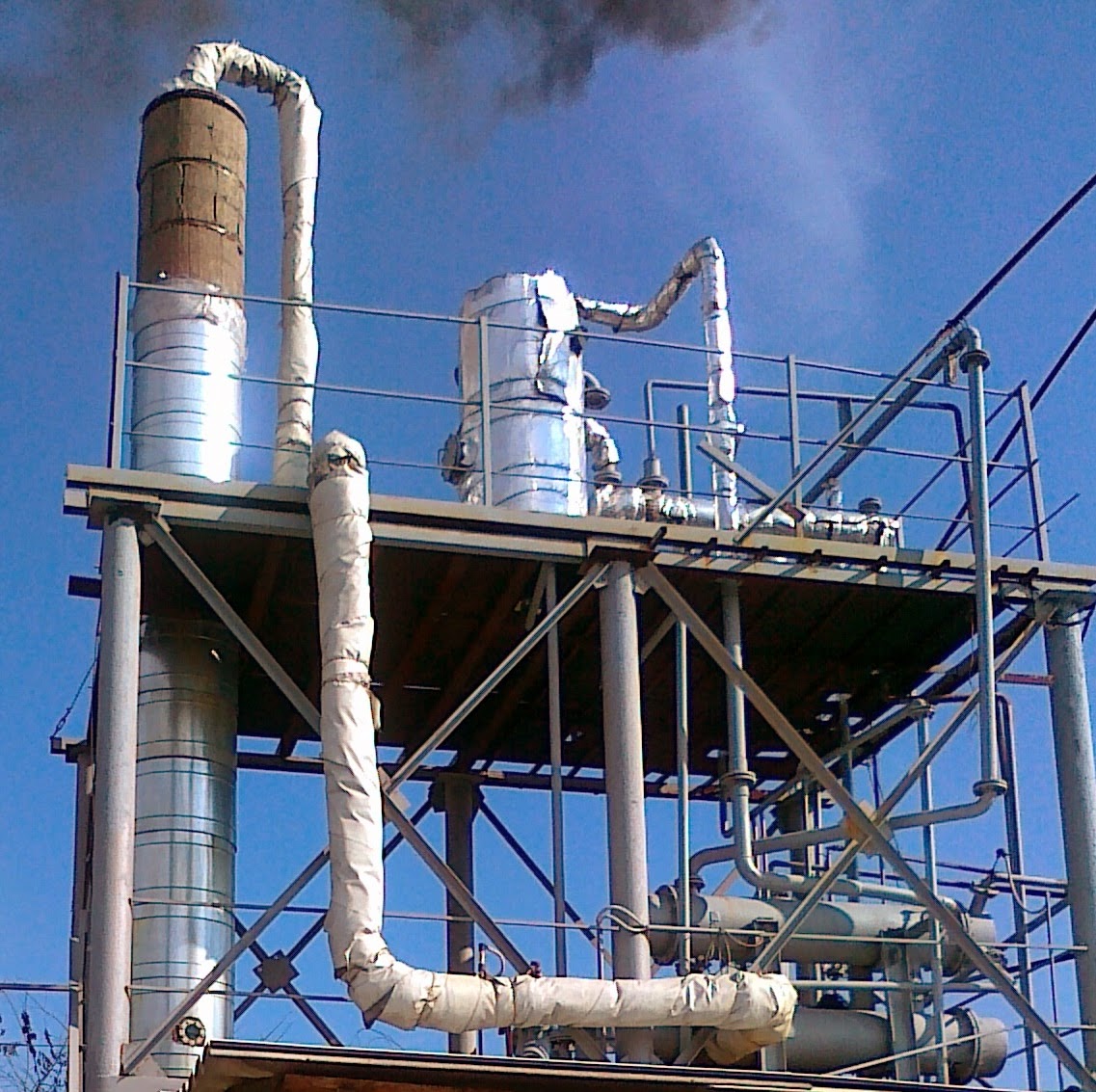 People will understand that when they receive the results or products in a higher manner. Separation efficiency of the cyclic trays does not based on the column diameter and people can easily control the liquid in trays. Internal columns in the cyclic distillation trays can be replaced effectively to gain the high mass transfer without any issues. Best manufacturers will perform this replacement work effectively with proper procedures in replacement. With this cyclic distillation trays, they can enjoy many economic benefits as capital saving, high reliability, high product yield and some other.

The distillation trays efficiency is completely based on the proper installation of the installers. Persons have to find the service providers who offer even post guaranteed service for their products. The working of the cyclic trays in the distillation system is very important to get the high profits for the investments
Posted by Unknown at 05:45